We had a Drascombe Longboat which I named “Halcyon”, built in 1996 at Honnor Marine in Totnes, Devon.

I bought her in 1999 from Bideford in Devon and as a family we had many adventures in her, sailing with the Drascombe Association throughout the UK. 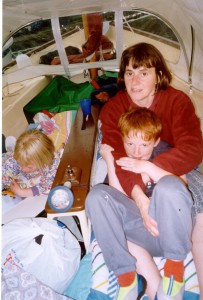 We made many friends in the Drascombe Association and sailed regularly with the Scottish members.

I recall one time we got our centre plate stuck on the Longboat on some rocks in Loch Creran and had to be towed off by Tom Adairs Drascombe Drifter “Smuggler”- a real character in Drascombe circles.

The depth sounder on a Drascombe was more often than not the centre plate!

The Scottish Drascombe Association members were great with Simeon and Marion who were very young at the time. I think some of them thought we were bonkers sailing with such small children!

We also sailed up in Scotland with the Scottish members with the Cape Cutter 19 and were always made most welcome, even though we did not have a Drascombe.

This was true camper sailing- we slept on board either side of the centre plate housing with the children at the aft end of the cockpit. We decided we needed a boat with a cabin after we got caught out at Ullswater with the boat on a mooring after it started to rain- and I had to get the tent up and all the bedding sorted in the rain. I looked at a Drascombe Coaster (too small) and then decided to look at the Shrimper and the Cape Cutter 19. The rest is history!